Its a race between someone dedicated to taking care of himself versus someone who strives to take care of others. One man brilliantly provides his own safety net with money sequestered in Cayman Islands and Swiss bank accounts; the other provides social safety nets like FEMA, the Affordable Health Care Act, and auto industry rescues. Ultimately, the race is between someone who would happily tie 47% of Americans to the roof of his car and someone who wants those Americans to ride with him in his car.

via Justin Frank: Wanting to Know… and Not.

From our friends at Dogs Against Romney:

DOG ON THE ROOF: On the Road with Mitt and the Mutt will be available next week! Have you registered for your chance to win a FREE signed copy AND Dogs Against Romney merchandise? 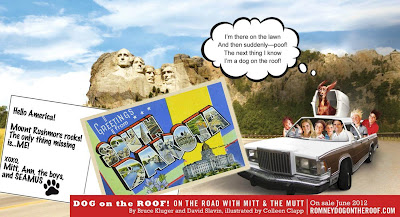 via Dogs Against Romney: DOG ON THE ROOF: Coming Soon!.

That infamous and seemingly immortal tale of Mitt Romney crating his dog on the roof of his car during a 14-hour road trip has already weaseled its way into the narrative of the 2012 campaign and is now splashing its way onto America’s bookshelves.

The Romney family’s now-deceased Irish setter Seamus’ story is being cemented in history in a 64-page satirical book, “Dog on the Roof,” set to be released June 19.

“Politics is hard for most people, including me, to keep their head around,” [Scott] Crider [founder of Dogs Against Romney] said. “Big discussions about universal health care and the debt issues and all these things are really big and complex for busy people to really be able to wrap their heads around.”

“This thing about Seamus cuts right through all that,” he said.

And while the story has already incited pet lovers, pestered the presidential candidate and punctuated attack ads, a national book tour devoted solely to propagating the decades-old event will likely reinvigorate the Seamus saga, which Romney has tried to put to sleep.

“Now for the first time, here is the completely true—and only mildly embellished— shaggy-dog story of Seamus Romney,” reads the books description. “It is the inside (well . . . overhead) look at the Man Who Would Be President and the wild ride that’s sweeping—and bewildering—the nation.”

The book’s intention is to be humorous, and it certainly sounds that way, but many take the story seriously, namely Sean [sic] Crider, the founder of Dogs Against Romney. Crider told ABC News that the “Dog on the Roof” story shows Romney’s “overall appearance of meanness.”

“It’s a character illuminating anecdote about Romney for a lot of people,” Crider told ABC News. “A lot of people are just pure dog lovers and see what he did as being abusive; others see it as a little window about what kind of guy he is.”

Dog on the Roof, for those interested, will be available on bookshelves next month.

via Romney’s “Dog on the Roof” Story Turned Into A Satirical Book.

By anyone’s measure, Neil McCarthy is a successful guy. A Yale-educated lawyer, onetime candidate for Congress and former executive vice-chair of the New York State Democratic Party, Neil still identifies with the stratum of society he was born into: the middle-income middle class.

That huge group of Americans is in danger of losing even more economic ground if Mitt Romney is elected president this November, says Neil. That’s why he’s now the chairman of Mitt Is Mean, a super PAC founded just over a month ago to raise $1 million from animal lovers who want to defeat Romney. Mitt Is Mean will use the funds to make videos and show them in swing states, in an effort to alert people to Mitt Romney’s callous and uncaring nature.

Yes, the name of the super PAC owes something to the efforts of Scott Crider, who sells t-shirts, bumper stickers and other items bearing the slogan “Mitt Is Mean” on his website, DogsAgainstRomney.com. Scott is a volunteer advisor to Mitt Is Mean.

Lighthearted though its name may be, Neil McCarthy is completely serious about the super PAC’s purpose. And he regards the story of Mitt Romney’s 1983 12-hour drive to Canada with the family dog, Seamus, confined to a kennel strapped to the roof of the car, as more than just a weird and attention-grabbing story.

“It’s a window onto Mitt Romney’s soul,” Neil said. “The guy really has no sensibility, no heart, no compassion.”

Neil and Mitt Is Mean cofounders Brad Bannon, Martin Dunleavy and Bob McDevitt  decided to form a super PAC because they all feel that “the character a candidate possesses tells you the nature of the policies they will pursue,” Neil said. Anyone who can treat a dog as Mitt Romney treated Seamus is unfit to lead the nation, they conclude.

“It tells you that if he were to become President of the United States, he would take Paul Ryan’s budget and try to pass it, get rid of Obamacare with nothing to take its place,” Neil said. “Mitt thinks that the same people who tanked our economy are the folks who should be running the world. I am not willing to give him the keys to the car that is the American economy, strap the middle class – the working class – to the roof of the car, and drive us all off a cliff.”

Neil is a persuasive guy who convinced one very special Republican to switch sides – his wife, Debbie. The couple met in 1992, when Debbie was working as the legislative director for the Republican U.S. congressman Neil was running against. Neil doesn’t claim he persuaded her all by himself – it was George W. Bush’s decision to block stem cell research that caused her to switch sides, he says.

That decision was made to please the far right, ignoring the desperate need of many people whose diseases could be cured through stem cell research. In much the same vein, Mitt Romney has shifted from positions Neil says most Americans regard as reasonable to stances calculated to please Republicans. Now, he says, it’s time to appeal to people’s compassion, and ask everyone to do what they can to prevent Mitt Romney from winning the White House.

Love and compassion for animals crosses party lines, and Neil is certain that spreading the story of Seamus will help win many people over to voting against Romney, and even to donating for the cause.

“I’ve told this story to many people over the last six months, and 1,000 palms have smacked 1,000 foreheads in disbelief,” he said. Because Neil speaks with people across the political spectrum, he’s certain at least a good proportion of those he’s related Seamus’ story to  are either independent voters or Republicans. Love and concern for animals is no respecter of party lines.

Spreading the word in swing states during the runup to the election will be effective, Neil says. “This episode [Seamus on the roof] is a good handle for explaining to people who Romney is, and for energizing people who love their pets, and would never do to them what Romney did to his. We’ll get out there and make sure the disaster that would be the Romney presidency will never come to pass.”

Neil credits New York Times columnist Gail Collins with making sure the story of Seamus – first surfaced in a 2007 Boston Globe story – doesn’t go away. “I love her,” says Neil, comparing her with Maureen Dowd, another New York Times columnist whose work he enjoys. “Their styles are similar – they both have a real nose for irony, and they’re funny.”

Bob Bannon, a senior advisor for the “Mitt is Mean” political action committee, said the story is still relevant today because, he said, “It’s a metaphor for how he treats public policy problems.”

Bannon said his group expects to raise $1 million to put up web ads portraying the Seamus scandal as a Romney character flaw, a flaw that he says will continue to be highlighted throughout the general election.

“It’s an issue with legs,” Bannon said. “In this case four legs.”

Help keep us nipping at Romney’s heels all the way to Election Day!

Go To Our Secure Contribution Page

Contributions to Mitt is Mean Are Not Tax Deductible

Paid for by Mitt is Mean. Not authorized by any candidate or candidate’s committee.

via Romney benefactor also dogged by past | ohmidog!.

Former Nixon Aide Fred Malek to host a lavish fundraiser for Mitt Romney on wife Ann Romney‘s birthday. Malek  was once arrested in an incident involving the killing and barbecuing of a dog.

“Malek worked with the administrations of both Richard Nixon and George H.W. Bush.  While in the Nixon administration, he compiled, at the president’s request, a list of Jews in the federal government. In 1988,  Malek resigned from the Republican National Committee over questions about his earlier role in President Nixon’s push to oust Jews from government positions.

Malek apologized and, as with the case of the cooked dog, denied playing a substantial role in the scheme.”

This man is disgusting, and to have Mitt Romney allow this guy to host a big fundraiser, on his wife’s birthday no less, shows that he puts  himself and his ambitions above the everday people and families of America. – Mimi

Former Nixon Aide Fred Malek to host a lavish fundraiser for Mitt Romney on wife Ann Romney’s birthday. Malek  was once arrested in an incident involving the killing and barbecuing of a dog.

“I don’t think Mitt Romney is purposefully trying to do that, but I think he should more careful about who he aligns himself with,” [Scott] Crider [of Dogs Against Romney] says.

The GOP Just Doesn’t Get It

Boston, MA-Republicans just don’t get it.

In an article which appeared in The Washington Examiner yesterday, Bryan York wrote that Republican strategists are dismissing the importance of Mitt Romney’s abuse of his dog, Seamus. Three out of five Americans live in households with pets and these animal lovers won’t forget Romney’s indifference to the suffering of his own dog.

In 1983, the Romney family took a vacation and drove 12 hours to Canada from the Romney mansion in Massachusetts.  During the entire trip, the family’s Irish setter, Seamus was exiled to a crate strapped on top of the station wagon. When Seamus answered the call of nature and rained on the Romney parade, mean Mitt hosed the car and poor Seamus down.

Neil McCarthy, the President of Mitt is Mean asked “If Romney treats his own family pet like this, how you think he’ll treat people he doesn’t even know? Romney has already made it clear that he doesn’t care about the cares and concerns of poor people, homeowners and working families.”

Mitt is Mean is a group of animal lovers and pet owners who want to make the case against the cold blooded and calculating corporate CEO.  Scott Crider, Founder of Dogs against Romney and volunteer adviser to Mitt Is Mean said “Republicans don’t want to discuss “Crategate” because they know Romney’s treatment of Seamus is indefensible. It’s a crate which will live in infamy.”

Like Loading...
Mitt is Mean is the only political organization endorsed by the Official Dogs Against Romney

News From the Web

Paid for by Mitt is Mean. Not authorized by any candidate or candidate's committee. © 2012 - Mitt is Mean
%d bloggers like this: